The Fall of The Benevolent Google

Louis Gray has a post where he declares that Google will never be "evil". I found it very interesting for a few reasons. Why does Google seem so benevolent? Why do so many people implicitly trust them? As Louis highlights, part of it is the corporate culture they've built. I think, however, there is a more concrete reason, one that is not guaranteed no matter how much you want to like the company.

How many of Google endeavors really generate revenue? In my mind, there is only one reason why they are able to embark on so many projects that seem to place the users best interests first, because the whole company is subsidized by the real Google, the advertising company.

Google has the luxury of being highly profitable, which allows it to branch out in many non-traditional ways.

Asked what a business is, the typical business man is likely to answer, "An organization to make profit". The typical economist is likely to give the same answer. The answer is not only false, it is irrelevant.

Profit and profitability are, however, crucial - for society even more than for the individual business. Yet profitability is not the purpose of, but the limiting factor on business enterprise and business activity...
- "The Essential Drucker", Peter Drucker
emphasis mine

Sure, you can argue that most of their projects to improve the web users experience ultimately benefit their ad business, but that kind of thinking is only tolerated when a company is highly profitable and experiencing significant growth. The only thing that needs to happen for Google to start acting "Evil" is for ad profits to decline and/or company growth to start missing Wall Street expectations.

You would immediately see projects that could only loosely be justified start to get canceled. Anything not generating direct profits would be scrutinized. If the ad business were to become really threatened, you would begin to see Google tapping a lot more of the value it has stored up in the power it has accumulated.

As long as things are going well, the decisions to create these projects, and the way they're handled in "non-Evil" ways won't be questioned. The moment that profitability comes into question, there will be a natural pressure to exploit Google's power position. If the management, employees, and engineers are unwilling to exploit the advantages they've accumulated, it is highly likely they will be replaced by ones who will (implicitly by the shareholders). 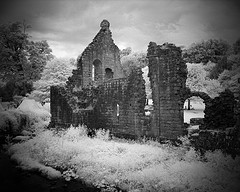 For those that think Google can never be Evil, I hope they're right. I hope Google always generates enough profits to place users, and user experience, first. I don't think it can last forever. Their advertising cash-cow will being to dry up at some point. That will likely be the end of the benevolent Google. It is, after all, still a corporation whose business activities are limited by profitability.

Neither Google nor its business model are trees that grow to the sky.
Advertising is a bubble. If that's a true statement, Google is a bubble too. And if that's true, many of the goods we take for granted on the Web are at risk. Let's run down some evidence.