Disclaimer: I have some Tesla shares and I'm long on them.

Not long after Steve Jobs had returned to Apple, I saw a commercial for the Titanium Powerbook G4. I had been using Windows computers and laptops for years, but something about the new laptop spoke to me. I still didn't take the plunge into Apple land for a few years, but the Ti Powerbook led me to start keeping on eye on what Apple was doing. (Side note: it's kind of amazing how the TI powerbook's design language still looks reasonably modern even though it's almost 20 years old).

It wasn't until the Aluminum Powerbook G4 was released that I finally scrounged up the funds to buy one. This was probably around 2003. After having used a really creaky, crappy Dell laptop for about a year at work (one where, whether it would wake or not from sleep was some mixture of voodoo and pure random chance) the Powerbook was a breath of fresh air. It mostly just worked. It actually could be put to sleep and wake up! It ran a Unix variant! The trackpad worked smoothly! It was pricey, no doubt. However in all the ways I cared, it was good or great.

I remember thinking at the time, this is a good product. I sensed that care had gone into its design. Someone had thought about the laptop from a whole experience point of view. Even the packaging it came in was thoughtful. It had features I didn't even know I wanted (e.g. like backlit keys on a laptop keyboard).

I evangelized my Apple laptop experience. In those years, people still believed Apple was a niche player that was about to go out of business. For a while, I was the "weirdo" in developer circles with my Apple laptop. People dismissed Apple as a cult of personality, as a bunch of irrational people buying their products because of slick marketing. The number of techie friends who would tell me how dumb I was because "I could buy twice the computer for half the price" failed to recognize that it was not twice the product.

Over the years people continued to dismiss Apple, but I watched as more and more people started appearing with Apple computers. I remember being at a conference a few years after the Intel Mac transition and looking back and seeing a sea of Apple logos. I still had friends that were completely perplexed that so many people were being "duped". 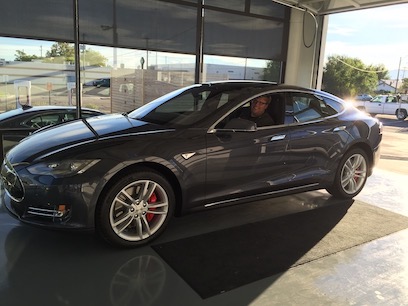 What does this have to do with Tesla? I get a deep sense of deja vu with Tesla. I had been following Tesla from their early days of their roadster release. When I got an opportunity to drive a Model S, I had that feeling again this is a good product. After having some success with one of my startups, the only real "splurge" I made for myself was buying a Model S. After having had the car for four years now, I still really love the car. Now when I sit in a Model 3, I think in many ways it is an even better product. The same product and holistic thinking, matured over time.

Once again there is a sense that someone is thinking through the whole experience. From the online ordering (no dealership, no salespeople), to the over-the-air car updates, the safety engineered into it, the less routine maintenance required, to the sheer joy of driving the car; you get the feeling that someone cares and has really designed the experience.

I also get the sense of deja vu when I hear people predict the demise of the company. Larger incumbents will enter the electric car market and crush them. Teslas are too expensive. It's a cult of personality. That it is a niche player.

However just like with Apple, I see the other companies beginning to copy (almost to a fault) what Tesla does. In one breath the media dismisses them as a niche. In the next breath the media goes out of their way to compare new car from traditional automaker X with a Tesla (as some kind of benchmark). However, even if other cars appear with some of the same design touches, I don't think they're thinking about it holistically, as a product experience. I also see the same "metrics" comparisons being made, 0-60, overall range, etc... However cars with seemingly equivalent gross metrics do not engender the same excitement as Teslas (like the Chevy Bolt whose sales apparently are declining).

When you hear people dismissing the users of a product as "cultish", it might be worth a pause. You can either assume that people are foolish and easily duped, or maybe, just maybe, the product really is great. I think that may be the biggest source of deja vu I get.

Much like that day when I looked back and saw the sea of Apple logos at the developer conference, I'm starting to see Model 3's all over the road. I think people who dismiss Tesla, or think of it as just another automaker, are going to be surprised by the next ten years.